Mobile Prices / Blog / Samsung Mobile / One UI 2.0 Samsung Said Who Will Be The First To Receive

One UI 2.0 Samsung Said Who Will Be The First To Receive

One UI 2.0 Samsung Said Who Will Be The First To Receive

One UI 2.0 Samsung Said Who Will Be The First To Receive. With the release of Android 10, Galaxy S10, Galaxy S10 Plus, Galaxy S10E Samsung beta operating system. Smartphone makers began to adapt it to their shells . It became known which Samsung models will be the first to receive One UI 2.0.

On the official Samsung forum for South Korean users, a post appeared with the announcement of the imminent release of the first beta version of One UI 2.0. It is reported that it will begin to be distributed in the coming weeks. It is indicated that South Koreans will be the first to take part in the shell test, which will later be joined by owners of Samsung gadgets from other regions. At the first stage, only three flagship models will participate in the test program – Galaxy S10e , Galaxy S10 and Galaxy S10 Plus Samsung beta operating system. A little later they will join the top version of this series – Galaxy S10 5G. 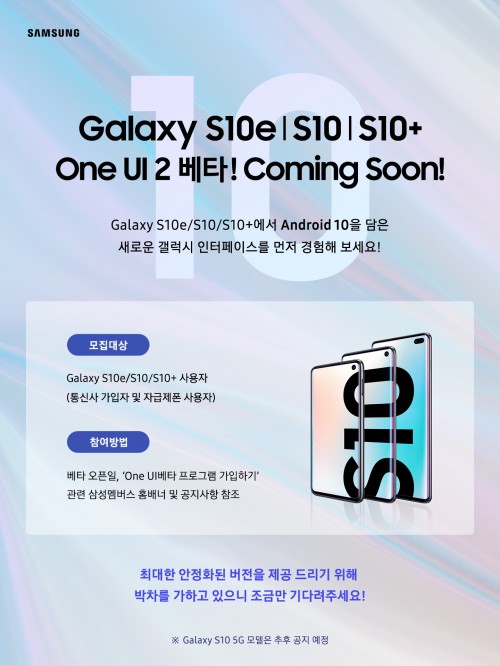 So far, the Galaxy Note 10 and Note 10 Plus phablets have not been included in the test program, but most likely this will change when testing is already deployed to full. Those who want in the forefront to evaluate all the features of Android 10 will have to register in the program through the Samsung Members application. But Samsung will not allow everyone to the beta version, but will choose a limited number of people from registered.

Xiaomi Mi Band 4 Is Represented In China Today, in

Samsung Galaxy A51 Released may be presented befor