Huawei has released a new series of smartphones Nova 7 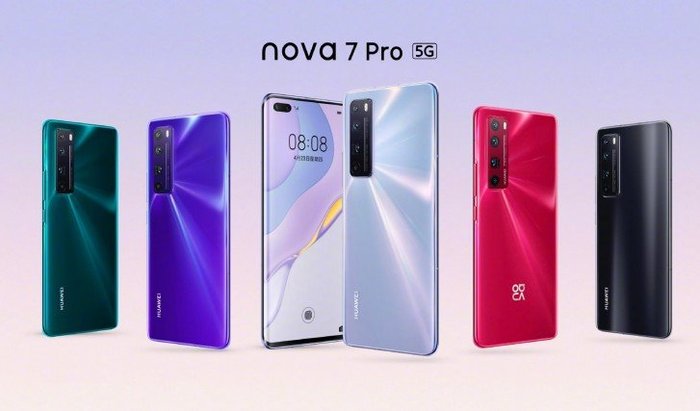 Huawei has released a new series of smartphones Nova 7

Huawei has released a new series of smartphones Nova 7. Chinese technology giant Huawei has finally officially unveiled the new Nova 7 series of mobile phones, which is represented by three devices. It is worth saying that the Nova series of phones has a unique design, powerful selfie cameras, as well as high technical characteristics. This year, the company introduced the Nova 7, 7 SE and 7 Pro models.

This smartphone is equipped with a 6.57-inch OLED display with curved edges. Its resolution is 2340 × 1080 pixels. The screen aspect ratio is 19.5: 9. In addition, it supports the DCI-P3 colour gamut. The smartphone screen is complemented by a dual front camera with 8 and 32-megapixel sensors.The Huawei Nova 7 Pro smartphone is powered by the Kirin 985 chipset with 5G support. The high-speed phone provides 8 GB of RAM. In addition, depending on the model, the novelty is equipped with 128 GB or 256 GB of permanent memory. As the OS, Android 10 with the EMUI 10.1 shell and without Google services is installed on the smartphone. This gadget is equipped with a 4000 mAh battery with support for fast charging 40 watts.The Nova 7 Pro model received a 4-module main camera Huawei mobile has released a new series. It includes a main 64-megapixel module with an f / 1.7 aperture. Also, the smartphone is equipped with an 8-megapixel wide-angle camera, a telephoto lens with an 8 MP sensor and a 2-megapixel macro camera.[caption id="attachment_24749" align="aligncenter" width="500"]

This new product has a similar design to the Pro version. However, this smartphone received a 6.53-inch OLED display. The screen resolution is 1920 × 1080 pixels. In addition, the mobile phone received only one front camera. The new smartphones Nova 7 hardware is represented by the Kirin 985 chipset. The device received 8 GB of RAM. Depending on the version, it is equipped with 128 GB or 256 GB of permanent memory. In addition, Nova 7 is equipped with the same main camera as the older version.[caption id="attachment_24750" align="aligncenter" width="700"]

Also, the technology giant introduced the budget model SE. This new product supports a 5G connection but works on the basis of the Kirin 820 5G chipset. The smartphone is equipped with a 6.5-inch display with a hole for the front camera. This mobile phone comes in two versions: 6 GB of RAM + 128 GB, as well as 8 GB of RAM + 128 GB. The main camera of the smartphone received the main 64-megapixel module. It is complemented by a wide-angle 8-megapixel camera, a depth-of-field sensor with a 2-megapixel sensor, and a 2-megapixel macro lens.

Biggest Movers: FTM Down 12% to Start the Weekend, as ATOM Hits 8 Month Low

Crypto Market Rout Pulls the Floor out From Blue-Chip NFTs, Weekly Sales Down 64%

As markets slid in worth in the course of the prev

As bitcoin dropped to contemporary new lows on Mon

Regardless of Terra shopping for $1.5 billion pric